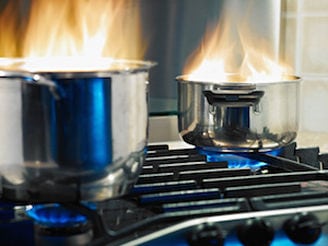 420 people didn’t think it could happen to them either, but it did

Let’s be honest, we’re flooded with a barrage of messages online every day. 10 tips to success. 5 steps to being more

organized. You have a problem, I can guarantee someone has written you a 3 step guide to overcoming it.

While it would be easy to tune out and not finish reading this blog post, I urge you to press on. It truly is a matter of life or death.

So what am I referring to? Household kitchen fires.

Ok, hang in there. I know you’re thinking, “Kitchen fires happen to people who are careless, it wouldn’t happen to me.” But that is where many great mistakes begin, in believing it could never happen to you.

Cooking fires far exceed most home-related fires and they are more expensive to repair.

According to the National Fire Protection Association (NFPA), one in 22 households will have a cooking fire each year. Cooking is involved in an estimated 156,400 home structure fires reported to U.S. fire departments. These fires caused:

Do I have your attention yet? These statistics are too startling to ignore. Check out this video to see what can happen from a stovetop fire.


In addition to being dangerous to your health and well-being, household kitchen fires are also extremely fiscally damaging.

According to claims data compiled by Nationwide Insurance, the average cooking fire damage claim is more than $30,000; four times higher than the next most expensive type of homeowners claim.

“Seventeen percent of all Nationwide Insurance residential fire insurance claims were caused by cooking last year,” said Mark Pizzi, president & COO of Nationwide Insurance. “We’ve learned a lot from our response to fires over the past few years. Having a plan and taking small steps now can goa long way toward preventing the unthinkable.”

Pizzi found that March – followed by April, December, October and May — were the months with the most kitchen fire claims.

So how do you make sure you don’t become a statistic? Here are some tips from the NFPA.

Keep anything that can catch fire, oven mitts, food packaging, towels or curtains, away from your stove top

Taking these precautions and being aware and alert while cooking can go a long way. Remember, no one ever thinks it will happen to them.